With its old city charm, illuminated bridges and dreamy canals, Amsterdam is such a romantic city. I spent a wonderful romantic evening in Amsterdam with my husband a few days ago. We went on a canal cruise, had dinner at the most romantic restaurant in Amsterdam, In de Waag, and took a walk around de Wallen neighbourhood. I have also included some other romantic things you can do during your Valentine’s Day in Amsterdam, at the end of this post.

My perfect Valentine’s Day in Amsterdam

My favourite neighbourhood in Amsterdam is de Wallen, so we’ve decided to spend our Valentine’s Day in Amsterdam there. It’s the oldest part of the city, where an old port once was. It’s also a place where you can see the narrowest canals, streets and some of the oldest houses in the city.

I also love walking around Amsterdam during the night when all of its bridges are illuminated. And when those light reflections in the water are making the whole city sparkling a bit. There is something so romantic in it, that only walking next to Amsterdam’s canals, could be enough for a romantic date.

An ode to the canals of Amsterdam

It comes as no surprise that even the unofficial Amsterdam anthem was inspired by them (this is the translation to English that originates from this post here).

That’s why we started our romantic evening in Amsterdam by taking a candlelight canal cruise and enjoyed our beloved city with a glass of wine in our hands. Slowly cruising along the canals in Amsterdam and watching the city from the water, is something I’ll never get enough of.

*TIP: If you would like to do the same, you can book a Candlelight Canal Cruise on a link here.

In de Waag – Romantic restaurant in Amsterdam with a historical setting

After the canal cruise, we went on our romantic Valentine’s Day dinner. And, to be honest, we couldn’t pick a more romantic restaurant in Amsterdam.

Could there be a better setting for a romantic dinner in Amsterdam than in one of the oldest buildings in the city? De Waag building had so many different roles throughout history. From the city gate, the weight house until it became a home to some of Amsterdam’s guilds. Rembrandt van Rijn has painted one of his most famous paintings on its top floor – The Anatomy Lesson of Dr. Nicolaes Tulp.

Well, today it’s a home to a wonderful fine dining restaurant, In de Waag. That historical setting, together with some 300 candles it’s illuminated with, made it a perfect restaurant for a romantic dinner in Amsterdam.

Valentine’s dinner at In de Waag

We had a three-course dinner and have ordered different dishes, so we could also try each other’s food. And it was a good idea because everything was so delicious. When the waiter brought us our starters, he explained to us what they were made of. And it sounded a bit like poetry to me (hmmm… or was I just in that overly romantic mode?). Marijan started with a North Sea Sole, and I had an Italian dish, Vitello Tonato.

After that, we got our mains. I have continued with seafood and had Ballotine of Salmon and Marijan ordered the vegetarian dish, Puffed Beetroot. I loved so much how they’ve prepared seafood in different ways in my dish. Both the presentation and the taste of our food was amazing. And that beautiful setting with some hearts, decoration and candles on the table just made a perfect romantic atmosphere.

I’ve also tried, for the first time, wine made in the Netherlands. It was a red wine called Dornfelder from Thorn in the Limburg area, and it was adorable. Different, but good different. I would definitely try it again.

And then, my favourite part of our dinner was a dessert. I’m not exaggerating when I say it was one of the best desserts I ever had in my life. And it was the first time I wanted to go to the kitchen and compliment the chef. Well, I was too shy to do that, but if by any chance that fine gentlemen is reading this, thank you for this beautiful dessert.

If you still haven’t decided on where to spend your Valentine’s Day dinner in Amsterdam, definitely consider In de Waag. It’s one of the most romantic restaurants in Amsterdam, and I think we’re going to spend more of our romantic dinners in Amsterdam there. Here is their Valentine’s menu together with that amazing dessert you can see on a photo below.

After a delicious dinner, we’ve taken a walk around the old streets of de Wallen. I’m always wondering about stories behind those canal houses and people that used to live in them. How many romantic dinners were organised in them? How many love letters were written? Did some of their former residents end up in those canals after learning about the unreturned love?

Well, back on a happier note, during our walk, we stumbled upon one of my favourite statues in Amsterdam. Sculpture of a couple kissing, from one of the plays written by a famous Dutch poet and playwright Gerbrand Bredero. He lived in this neighbourhood at the beginning of the 17th Century.

As we walked past the Geldersekade canal, we walked towards another quite romantic sight in Amsterdam – Schreierstoren. Better known as a Weeping Tower. The legend says women from Amsterdam would come here to say a final goodbye to their husbands and lowers before they would go on long journeys with their ships. Being true or not, it’s a nice reminder to be grateful for having our loved ones next to us.

Some other romantic things to do in Amsterdam

There are so many different things to do on Valentine’s Day in Amsterdam. If you have the whole day to spend in a city, then here are my recommendations for some other romantic things you can do. Of course, before finishing your day by having a romantic dinner at In de Waag (I’m obviously still dreaming about that dessert there…).

# – Go to the movies – A bit of a cliché, but it could be quite an experience in Amsterdam. Two historical cinemas in the city could be a great place to spend your Valentine’s Day. The Movies Amsterdam is the oldest functioning cinema in the town. And Tuschinsky Cinema is located in a beautiful Art Deco building that was built back in 1921. Watching a movie in it is almost like you’re in a classical theatre. Definitely, an exceptional experience.

# – Take a canal cruise – That’s such a romantic thing to do in Amsterdam. You can choose to go on one of the organised canal cruises with candles and drinks included as we did. Or, if you’re a bit braver, you can rent your own boat, get some blankets, warm cocoa and enjoy in your own private cruise.

# Look for love related paintings at the Rijksmuseum – It so interesting to me to look for romantic scenes at the old paintings of the Dutch masters in the Rijksmuseum. Seeing how those people loved each other or looking for little symbols of love, the painter would often include on them, is definitely something to do on Valentine’s Day in Amsterdam.

# – Listen to the concert – Het Kononklijk Concertgebouw organises so many great and interesting music performances. From some classical pieces to the Star Wars and other music from the movies. It could definitely be a nice place for a romantic date in Amsterdam.

# – Go to Amsterdam Museum – Amsterdam is quite important place for development of LGBTQ rights. The first same-sex marriage was held in Amsterdam, and you can see the rings they’ve used, exhibited at the Amsterdam Museum. If you would like to celebrate the freedom of love, that could be a nice place to visit on Valentine’s Day in Amsterdam.

# – Walk along the canals and kiss at the Magere Brug – One of the Amsterdam’s legends says that those who kiss at or below the Magere Brug (Skinny Bridge) will stay together forever. So, during your cruise, be sure to kiss when passing below it. Or, if you’re going to take a walk around Amsterdam, pass over the bridge and kiss while on it.

# – Buy flowers at Amsterdam’s Flower Market – This is also a romantic way to step into Amsterdam’s history a bit. Famous Amsterdam’s Flower market is there at least from the Dutch Golden Ages (17th Century). And it’s a place where Amsterdammers were buying flowers for their loved ones for centuries. So, getting some roses or even tulips there could be a nice start of your romantic evening in Amsterdam.

# – Jewellery from Amsterdam – Jewellery is always a nice romantic present. And it would be even better if it’s going to be inspired or produced in Amsterdam. If you would like to go with something extraordinary, Amsterdam was famous in history, and it’s still important as a diamond cutting centre. There are still some famous diamond producers operating in Amsterdam. So, if you would like to buy a piece of jewellery with a bit of Amsterdam’s history in it, pay a visit to some of them.

*And what about a Valentine’s Day card? I’ve recently read somewhere that around 150 million cards are exchanged each Valentine’s Day. That’s crazy, right? But, it’s also somehow nice to read people are still sending those real, rather than digital cards. If you would like to send a special Valentine’s card, take a look at some of these cards inspired by Amsterdam. 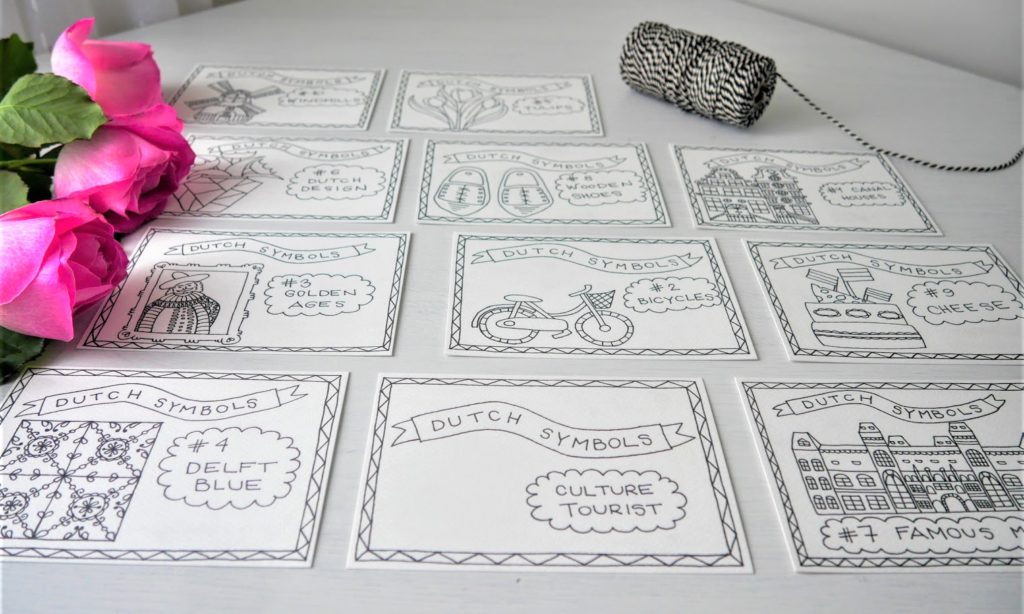 Are you planning to spend Valentine’s Day in Amsterdam? Well, I hope this blog post has helped you in deciding how to spend it and at least, in looking for a lovely romantic restaurant in Amsterdam.

*Disclaimer: This blog post was sponsored by In de Waag Restaurant. However, we truly enjoyed our dinner there, and I would recommend it to anyone looking for a nice romantic restaurant in Amsterdam with some fantastic food. Of course, as always, all opinions are my own.

My name is Tea and I am an Amsterdam based blogger, art lover, travel enthusiast, coffee and fashion magazines addict. And a founder of the Culture Tourist.

Hello and bok! My name is Tea :) There are some ne

Everyone knows about Florence's grand Duomo, but c

On this day over 450 years ago, the painter Carava

5 reasons why cultural tourists should travel in E

Following the footsteps of Vincent van Gogh
Read the series